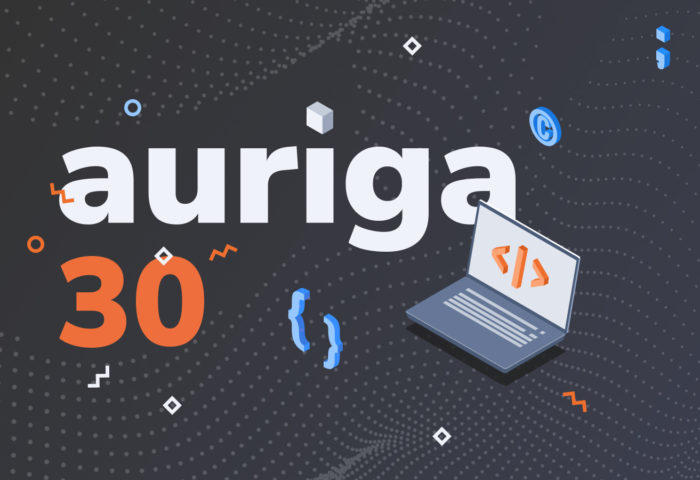 “A” for Software Development Services

Auriga 30
Discover Auriga
Back to blog

This year, Auriga is celebrating its 30-year anniversary. We evolved from a rather small, embedded development services boutique, a Moscow State University spin-off serving a few US-based companies, into an international company with a truly global customer base, 600+ engineers, seven development centers, and over 100 projects annually.
Auriga has changed a lot and yet preserved its core values over the years. In this article we want to share an insight into how it all started back in the 1990s and to pay our respects to all our founders, customers, and engineers, some of whom have stayed with us through all these years.

For the US, the 1990s are primarily remembered as a time of rapid technological change, introducing the World Wide Web, Pentium CPU, and Wi-Fi to name a few. Linux OS, first introduced in 1991, hooked up developers with the open-source concept. Java’s “Build Once, Run Anywhere” design delivered in 1995 ultimately made it the primary choice for cross-platform, multi-channel, and database software worldwide. With all these booming technologies, dot-com giants and smaller companies rather quickly ran out of local talents and were forced to hire engineers from abroad.

Nowadays, India and China are well-recognized players of the modern IT outsourcing landscape. But back in the 1990s, China was not abuzz, and India, despite government efforts to promote a state-wide vision for the IT industry, remained a niche rising star. US companies, on the other hand, were looking for coders they could bring into projects right then and there, and they found the needed taskforce in Russia. Most of the Russian software development companies were started in the early 1990s by founders with an academic background seeking a place in the new market economy. So, a solid number of mature, enthusiastic developers with an intermediate level of English and basically the same cultural values were a perfect match for the talent-hungry American market.

“The Godfather of Russian Outsourcing”

Dr. Alexis Sukharev, Auriga’s founder, is a retired Moscow State University professor, where he worked for over 20 years; a former board member of several US, EU, and Russia business and industry associations; and the author of several books. Dr. Sukharev was one of those talented driving forces who highly contributed to Russia’s growing success in the global outsourcing market and represented Russia as a reliable strategic partner in software development, as he was often invited as a keynote speaker to various European, American, and Russian conferences. The New York Times named Dr. Sukharev the “Godfather of Russian outsourcing” in its publication (2004), while Forbes featured Dr. Sukharev and Auriga as a success story in its Russian software exports market report in October 2007. We asked Dr. Sukharev to share the story of Auriga’s origin with us, and he gladly obliged.

The idea of launching a software development business first came to me in 1988, and in early 1989, I contacted Professor Joseph Traub of Columbia University who at that time headed the Computer Science Department there and was the National Research Council (NRC) Computer Science and Technology Board (CSTB) Founding Chair, serving as an «adviser to the nation» on the computer and IT challenges. I first met Joe in 1978 when he was Head of the Carnegie Mellon Computer Science Department. I was then spending the 1977–1978 academic year at the University of California at Berkeley as an exchange scholar from Moscow State University. Both Joe and I worked in the computational complexity field. I spoke at Joe’s seminar at Carnegie Mellon in April of 1978, and we have been keeping close contact ever since.

Having received my message, Joe called three of his Board members—R&D VP and CTOs of IBM, Hewlett-Packard (HP), and DEC—to check if they were interested in an opportunity to develop software in Russia. Two of them—HP and DEC—demonstrated some interest, with DEC leaving the discussion soon. As for Joel Birnbaum of HP, he was really interested right away and introduced me to Herb Blomquist, Head of the HP Contract Programming Department, and his team. After several visits to both the US and Russia and numerous discussions, it became clear that founding a company in Russia was needed to develop a business with HP.”

Auriga was first named INFORT and was registered in Moscow on December 29, 1990. Two years later, it was incorporated in the US under the name “Auriga Inc.”, gaining inspiration from astronomy and Greek mythology. The idea was that an IT company named after a constellation would be a perfect personification of Russian engineering talent as a vital part of technologically complex products, delivering high quality and an academic mindset. The corporate slogan was “Russian Software Engineering Expertise – Delivered Worldwide.”

Being a Moscow State University Professor, I put a lot of effort into promoting not only my company but also the excellence of Russian software expertise worldwide for countless years,” Dr. Sukharev commented.

Auriga started working with HP in 1991 on a system facilitating their contract programming business (primarily, we were in alongside several Indian companies as well and made it a point to prove the quality of the code delivered). That project continued through 1992 and 1993, and its scope was to design and implement a database application for Hewlett-Packard to track contracts with outside consulting companies and independent contractors for several HP entities, monitor the completion time and project status, and generate reports on the projects’ financial status.

In the meantime, the Packard Initiative was announced by David Packard, one of the two HP founders, who was the HP Chairman at that time. The initiative focused on choosing the exclusive HP business partners in a few Russian regions, training their employees in Cupertino, CA, for one year, and then developing software for HP by its exclusive business partners in Russia. Two business partners in St. Petersburg and Obninsk in the Kaluga Region had been selected, but HP kept postponing a decision on a business partner for Moscow and the Moscow Region. It was predicted that it would be a major company working on HP projects with far more people working for HP than any other partner.

Even though Dr. Sukharev’s activities partially triggered the Packard Initiative itself, INFORT was rather small to win the bid, so the company’s founding father needed to think outside the box and be very convincing. During his entire business career, Alexis strongly believed that the key to project success in the software development market is not money or infrastructure but people — their skills, attitude, culture, background, and mindset. So, he placed his bets on finding the right people for the HP project, in particular strong UNIX system-level engineers, who in the early 1990s were rare in Russia. INFORTwas able to submit the first 11 candidates, and HP approved nine of them. This was a phenomenal success, as their approval rates with other companies were typically less than 20%. HP management was impressed by the approach, and INFORT became HP’s exclusive business partner for Moscow and the Moscow Region.

As time went on, the US put restrictions on bringing in foreign developers and encouraged more US-based engineering positions. Russian engineers, training for HP in Cupertino, encountered these labor market changes as well. This later became a fact of everyday life, but HP did not wait. The Packard Initiative was first suspended and then canceled in 1994 altogether. Fortunately, by that time, INFORT had another customer in the US: Aquila Technologies Group of Albuquerque, NM, one of the major suppliers of industrial controls, safeguards, surveillance, and seals, computer systems, and secure computer networks. Auriga’s team was involved in a range of embedded and system-level software development projects for UNIX.

In years to come, Auriga put every effort into building the solid reputation of a reliable software development partner for companies in diverse domains—hardware manufacturers, medical device companies, software vendors—both industry leaders and niche players. Established as a rather small company located on Moscow State University premises to provide embedded and system-level software services, Auriga steadily matured its expertise and entered the rocky 2000s with a few dedicated customers and an ambitious desire to challenge India’s dominance on the IT market and win a spot for Russian talents. And throughout all market ordeals and technology breakthroughs, Auriga evolved and grew stronger remaining true to our key approach: building customer trust, delivering excellent quality, working as a team and loving what you do.

I am honored to realize that the principles, values, and passion I put into Auriga years ago are alive and flourishing. Thirty years of continuous success in such an unpredictable, rapidly changing, and essential market is an achievement, I guess,” Alexis Sukharev told us.