Testing
Back to blog

Dynamic program analysis, also known as profiling, is widely used in various business areas, from healthcare to industrial automation. It helps identify application hotspots and race conditions, find errors dealing with the application memory, and estimate the actual RAM consumption. Moreover, such dynamic analysis techniques as Taint Analysis and In-Memory Fuzzing allow identification of parts of the program that are most susceptible to exploitation.

At the same time, the obvious disadvantages of dynamic analysis include:

Dynamic analysis must be included in the test plan to ensure a more comprehensive analysis of the application. Moreover, in some cases, such as FDA certification of medical applications, dynamic analysis is mandatory. There are many ready-to-use solutions and tools on the market, but what if the necessary tool is unavailable, or too expensive, or not sufficiently functional? These situations are exactly when Intel Pin comes to the rescue!

Intel Pin is a dynamic binary instrumentation (DBI) framework that enables the creation of dynamic program analysis tools to perform code analysis of the userspace applications.

The framework allows the behavior of compiled programs to be managed by embedding arbitrary C/C++ code during program execution. Therefore, the source code and program recompilation are not required. Pin supports Linux, Windows, and OS X. The Android version of Pin can also be found in official sources.

The tools created using Pin API are called Pintools. For Pintools development, Intel provides Pin kits that include the source codes for many tools.

A Pintool is a compiled binary file. For Linux systems, it is a shared library with a .so extension; for Windows, it is a dynamic library with a .dll extension. The interaction of Intel Pin, Pintool, and the analyzed program can be represented as follows: 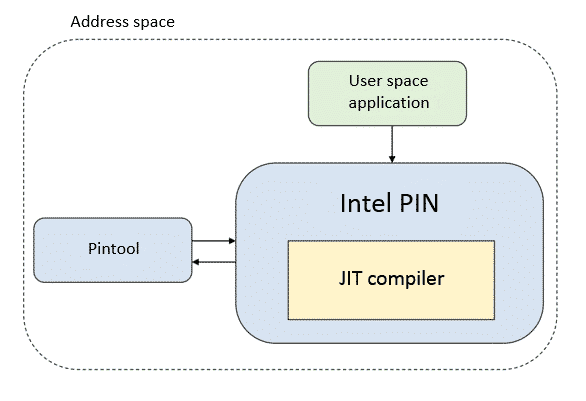 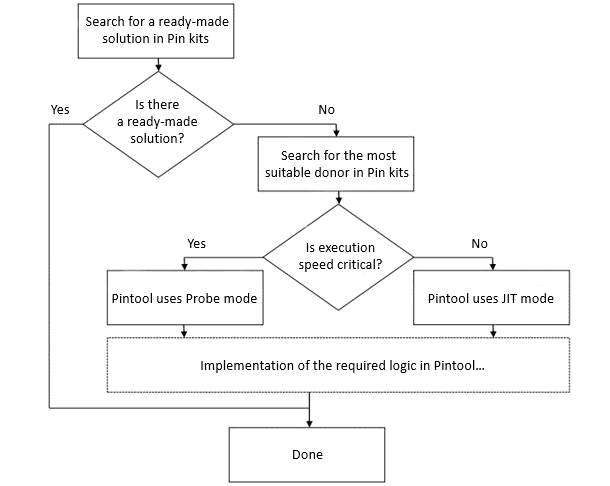 Are There Any Drawbacks to Intel Pin?

It is important to note that, despite its wide acceptance, Intel Pin still has a number of drawbacks.

Firstly, it does not allow working with IR (Intermediate Representation). IR is an intermediate representation of the program source code for subsequent processing (optimization, for instance), where each variable is based on the SSA (Static Single Assignment) principle. If the engineer does not have access to IR, the implementation of some of the above-mentioned techniques becomes much more complicated. For example, implementing the Taint Analysis technique in this case would require monitoring of all memory accesses to expose the entire chain of tainted objects.

Secondly, when using Linux OS, there may be a compatibility problem with the latest version of GCC. If you use the latest compiler in your project, you will have to wait for the updated Intel Pin version.

One more issue evolves if the Pintool on the project is meant to be multi-threaded. To implement the logic for working with threads, you will have to use the Pin Thread API. Intel officially states that you cannot use pthreads on Linux, and if you are a Windows developer, you will have to drop off the Win32 API.

Finally, C++11 cannot be used in Pintools, at least in the out-of-the-box version. You can still enable C++11 if you look closely at the Makefiles in Intel Pin. No negative effects of this change have been found.

Summing up, despite these limitations, if you need to develop your own tool for dynamic code analysis, Intel Pin is a great option. Its API is well documented and easy to work with. Additionally, Intel makes serious efforts in building an engineering community around their products.